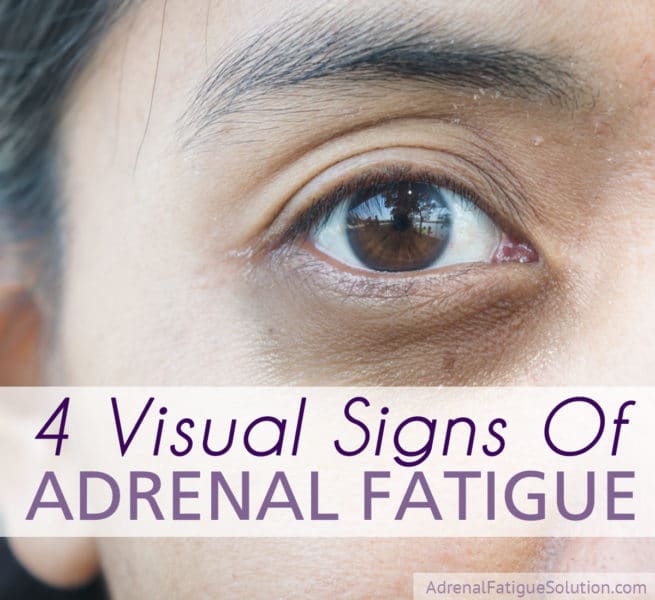 From the moment we’re born, we instinctively learn to make judgements and assumptions about people based purely on what they look like. People with beady eyes may be thought of as untrustworthy; on the other hand, people with rosy cheeks might seem friendly and approachable. Rightly or wrongly, we’re programmed to make these observations without even thinking twice about it.

But what if there was more to this than simple human instinct? Could your outward appearance actually provide deeper clues, not just about your personality, but also about your inner health?

Do you have dark circles under your eyes? Vertical lines in your fingertips? Hairloss, adult acne, or dark patches on your skin? All of these can be signs of Adrenal Fatigue.

Let me give you a few examples:

Iridologists maintain that the iris (the coloured portion of the eye) contains a library of information about your genetically inherited health. It’s interesting to note that biometric scans are increasingly being used over and above fingerprinting for the purposes of personal identification.

Reflexologists propose the idea that clues about a person’s wellbeing can be divined by observing the appearance of the feet. For example, redness in a certain “reflex area” can indicate heat or inflammation in the corresponding part of the body.

Centuries ago, Chinese physicians developed the art of tongue diagnosis, stating that the strength of a person’s digestive system can be accurately intuited from examining the tongue.

Modern science is increasingly verifying these time tested observations. In fact there are a number of common, visible signs that can provide you with valuable insights into the current state of your health.

What does your appearance say about your adrenal health?

Adrenal fatigue and your skin

Stress is a common denominator for everyone with adrenal fatigue. It’s a given that it takes its toll on your emotional wellbeing, but did you also know that it directly affects your physical appearance?

Whenever you’re in fight or flight mode, the body produces cortisol which causes increased oil production and outbreaks of pimples. Even people who have never had problems with their skin can suddenly develop acne when faced with prolonged periods of stress.

Advanced adrenal fatigue can also cause hair loss. This is due to something known as the telogen or fall out phase. When this happens, the body stops growing hair in order to focus all of its efforts on healing and repairing. New hair temporarily stops growing, and as the old hair is shed, it appears to get thinner and patchier. Although hair usually grows back, the stress of having this condition can often leave the sufferer feeling trapped in a seemingly vicious cycle.

Adrenal fatigue and your hands

Surprisingly, there’s a lot your hands can tell you about the state of your adrenal health. As one of the first places to show signs of ageing, what’s less commonly known is that your hands can also act as a barometer for your general wellbeing.

For example, many people with adrenal exhaustion find that the skin of their fingertips gradually becomes covered with vertical lines, and fingerprints can seem to get fainter. This is a clear warning that your adrenals are under stress. Cortisol dysregulation has long been associated with lower levels of collagen, which your body needs to maintain skin thickness. Sweaty palms are another sign that often goes unnoticed, but it may in fact be an indication that there are underlying issues with your thyroid.

What do your eyes say about your adrenal health?

Dark circles under the eyes are a common feature for people with adrenal fatigue. This is because the liver and kidneys are often under undue pressure to cope with excess circulating hormones such as cortisol and adrenaline. These hard working organs have a struggle to continue to flush toxicity out of the system, and this manifests as circles and bags under the eyes.

Dark circles are also a common feature amongst people who suffer from a lack of sleep – something that people with adrenal fatigue know a lot about. This is caused by fluctuating cortisol levels that make it difficult to establish a natural sleep rhythm at bedtime.

Looking after your appearance can often be low on the list of priorities when you’re tired and just about making it through the day. However, keeping an eye on your skin, hair and nails may actually prove to be a useful way of monitoring improvements in your health.